Our second meeting at Lions Hall went well and featured an ARRL podcast provided by Phil, G4UDU about suitable wire for antennas. Some discussion took place afterwards, with tales of member’s observations of public antics and things catching fire.

The parking in Roberts Road seemed to be a little easier this week, but if there’s no on-street parking, Norman’s arranged for us to park behind the nearby carpet shop, ONLY on Wednesday evenings and only if it doesn’t block other users from entering or exiting.

For our newly licensed members as well as the ‘old timers’ our next meeting is a Practical Evening. Don’t feel that you’ll be out of your depth – we’ll all be experimenting and unsure of the result, so a good chance to dive in and have a go.

We’ve done very well with donations of biscuits for the past few months – thanks to all who provided them. We will obviously need more in the coming months, so please consider ordering the odd extra packet when you do your shopping and donate to the club.

I’ve asked before and we seem to be getting nowhere, but I do need more editors to produce this Weekly Bulletin. This must be on a regular reliable basis and would probably suit people who are retired. With only a few extra people, each individual would probably only have to do it once a month or even every 6 weeks. Please consider helping out, or the Weekly Bulletin will cease to be produced!

For further information as it occurs, please visit the WADARC website: www.wadarc.org.uk

Details of other UK rallies can be found on this excellent website: http://www.g4rga.org.uk/All.html

SPOTLESS SUN SPARKS AURORAS: The sun has been spotless and quiet for 6 consecutive days. Nevertheless, auroras are dancing around the Arctic Circle. On Jan. 24th, “the lights were absolutely amazing, they blew me away!” reports Marianne Bergli, who sends this picture from Tromsø, Norway: 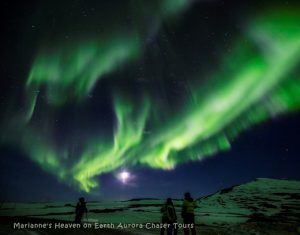 “Even with no solar storm, the view was unparalleled,” she says.

What’s going on? The answer is “Tromsø.” The island city in Norway is located beneath our planet’s persistent auroral oval, a ring-shaped region surrounding the north pole where the geomagnetic field guides solar wind particles down onto the upper atmosphere. This extra-terrestrial rain may ebb, but it never stops. Inside the oval, sputtering auroras can suddenly blossom into magnificent sprays of green and purple light–no solar storms required.

We predict that the sun will be spotless at least 50% of the time in 2018 as the solar cycle plunges toward a deep minimum expected in 2019-2020. Arctic auroras, however, will continue

As you can see, the HF bands are not likely improve for another 2 years at least, so DX chasers will have to do just that – chase and constantly look out for openings!

As usual, if you’re there at the right time, enhancements may be observed. ON0VHF rose out of the noise several times last week, up to around S5 and long enough to indicate that the band was good for DX.

Beacons often heard in our area:

This week’s bulletin was made possible with information provided by
EA1HEO, The Daily DX, the OPDX Bulletin, 425 DX News, DXNL, Contest
Corral from QST and the ARRL Contest Calendar and WA7BNM web sites.
Thanks to all.

TANZANIA, 5H.  Janusz, AK4JK is QRV as 5H0JK from Rungwa.  Activity
is on the HF bands using mostly CW and some SSB.  His length of stay
is unknown.  QSL to home call.

TOGO, 5V.  John, N9MDH is QRV as 5V1JE from Lome until the end of
May.  Activity is on the HF bands, with a focus on the newer bands,
using mostly digital modes.  QSL to home call.

COMOROS, D6.  Giovanni, IK5BCM, Giuseppe, IK5CBE and Giovanni,
IK5CRH will be QRV as D68I from January 29 to February 10.  Activity
will be on 80 to 10 meters using CW, SSB and various digital modes.
QSL via IK5CRH.

GUADELOUPE, FG.  Operator F6APE is QRV as FG4KH until February 13.
Activity is on the HF bands.  This includes being an entry in the
REF CW contest.  QSL via F1DUZ.

GUINEA-BISSAU, J5.  Livio, IZ3BUR is QRV as J52EC until February 21
while on a mission to support a Books for High School of Cumara
project.  Activity is in his spare time.  QSL to home call.

PERU, OA.  Special event station OC4MS will be QRV from the Mateo
Salado Monumental Archaeological Complex on January 27 and 28.
Activity will be on 80 to 10 meters using CW, SSB and various
digital modes.  QSL via OA4O.

CURACAO, PJ2.  Jeff, K8ND and Jim, W8WTS are QRV as PJ2ND and
PJ2/W8WTS, respectively, from the Signal Point station until
February 5.  Activity is on the HF bands.  They will be active as
PJ2T as a Multi/Single entry in the CQ World Wide 160 Meter CW
contest.  QSL to home calls and PJ2T via W3HNK.

UKRAINE, UR.  Special event station EM80I is QRV from Druzhkivka to
celebrate the 80 years since the birth of poet, stage and film
actor, author and singer Vladimir Vysotsky.  QSL via operator’s
instructions.

UK SOVEREIGN BASE AREAS ON CYPRUS, ZC4.  A group of operators are
QRV as ZC4A until January 31.  Activity is on 160 to 10 meters using
CW, SSB and RTTY with a focus on the low bands.  QSL via M0URX.

SOUTH AFRICA, ZS.  Members of the Secunda Amateur Radio Club are QRV
with special event call ZS30SRC until January 28 to celebrate the
club’s 30th anniversary.  Activity is on the HF bands with six
stations active.  QSL via operators’ instructions.

The ARRL International Grid Chase runs during all of 2018.

Here’s an extract from the result of Wednesday’s meeting of Lancing Parish Council, dealing with our complaint:

In answer to some of the points that were raised in the complaint, explanations are provided below:-

You will note that the subject of our main complaint – the fire alarm – has been carefully avoided. I will be requesting a copy of the minutes of their meeting to ensure that it was covered.

On point 1 – not true. Norman requested the erection of a shed-style building – just like the one that Montesiori Nursery have erected!

Point 2 – I’m not qualified to answer their reply. Someone else may wish to take it up.

Point 3 – Partly true. The gate was not blocked, but the passage from there to the rear car park is blocked by a rather large shed!!!

The good news is that Lancing Parish Council have agreed to remove and return our aerials at their expense.

Unless WADARC members wish to take the matter further, I propose that we don’t waste further time on it, apart from collecting our aerials.